The earliest recorded association between 1 April and foolishness can be found in Chaucer’s The Canterbury Tales (1392). A lot have changed since then. It has grown to be associated with pranks and some really smart and funny stuff. I am trying to capture some of the the best ones that I encounter for 2015 in this post. Do help me in making the list better by letting me know about the jokes and pranks that I missed. Given below are some that I found interesting. 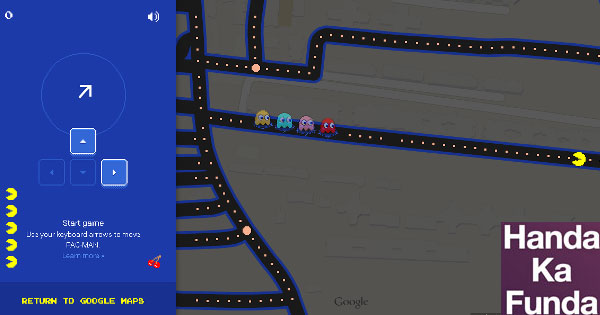 Trust Google to come up with the best when it comes to April Fool jokes. My favorite one has to be GMail Paper which they did way back in 2007 (If you are too young to remember it, they promised to print all your email and send all the paper to you via traditional post)

The Google Maps Pacman is right at the top of the list. Just go to Google Maps and on the bottom left you will get an option to convert any location into a Pacman screen. Pacman, as usual, is fun in any setting. This post got delayed by at least an hour because I just got busy playing. đź™‚

Well, how do I explain this? Google has done a brilliant job by reversing not just their homepage but the entire search results as well. You should definitely check it out for yourself. Go to com.google

Here is a screenshot if you search Handa Ka Funda on it.

Ola has indeed taken it a notch higher – literally. They launched Ola Air at a price of Rs. 499 per ride. đź™‚ It also promotes the product that Ola has really well.
Features that will blow your mind:
Track your helicopter ride in real time
Choose your pickup location
Get pilot details
Door-to-door pickup

Freecharge came out with an app called Buzzkill, which helps you chase away mosquitoes. They made a funny video to explain how it works. The video features an extremely uncomfortable Kulin Shah and two baldies. Well, #TheirChoice (you see what I did there). It is a little long but funny enough to merit one viewing.

Uber is hooking you up for a free cab ride. Well, with Ola at its heels – they seem to be doing something similar every other day. So, what’s new? Well, the cars are not just cars – they are SUPERCARS. Only when you go to the Uber blog and read the post about Supercars, you realize it is a joke. The event, if you can call it that, is done in collaboration with Hamleys India (a toy shop).

Smartbox is an actual mailbox that offers many features that you currently have with email, including smart folders. The Smartbox will even electrically shock anyone who tries to fill your mailbox with spam.

Motorola has jumped on the April Fool bandwagon with – guess what – a selfie stick. The idea would be really funny and innovative if there were no real selfie sticks in the market. But well – we live in a world where Buzzfeed shares a comfortable relationship with the White House. Even back home, we have a Prime Minister who is a little more obsessed with selfies than the average politician but less than a Japanese teenage girl.

Well, it is a black and white and Asian – and also cute. Google Japan seems to be working on a Pet Google Panda which will be an assistant powered by Google. Watch this video to understand more. And just in case you are Japanese, there are subtitles too. đź™‚

Samsung has announced the worldâ€™s first smart knife with smartphone capabilities, the Galaxy BLADE edge. It comes packed with features like Food Photography and Thermometer Stylus. Complete features of the smart-knife.

There are four variants available for the handle, they are:
Premium Olivewood
Ergonomic Ceramic
Stainless Steel
and behold….
Premium Mammoth Tusk
The Premium Mammoth Tusk Ivory Inlay Edition is made from real mammoth tusk, found beneath the surface of the North Sea. I am surprised why isn’t PETA going after SAMSUNG. While Google is promoting Pandas as pets, Samsung is going in the other direction by killing Mammoths. #OUTRAGE

Matt Cutts, from the house Lannister, gets A for effort. He wrote a blogpost, set up a website, and even addressed a pain point for SEO newbies. Now don’t fall prey to the honeypot and leave your email id there. Or do it – may be there will be something more interesting and funny to follow it up. đź™‚

Zomato launched the Zomatcho app that plays matchmaker based upon your preference in food. To be honest, the entire things seemed like a lazy effort or an after-thought. Kind of like – everyone is doing something, we should do something too. You can read the entire blogpost about Zomatcho written by Shantanu Basrur. He seems like the Sangakara who gave his best effort till the end when no one else in the team was interested in working on it.

This was done by Bluegape. For those of you who do not know it used to be a merchandising store and in its new avatar it is kind of like buzzfeed / listverse but with visuals. I might be horribly wrong about this but then again, I have not understood Instagram till now. The reason why I added this was because of the brilliant clickbait it formed. Well, who will not click at a post which says Flipkart To Acquire SnapDeal In $4 Billion Of Cash + Equity Deal. Raises $20 Billion Did not link it because it was a boring post with old photographs. Nothing funny or smart to read there.

Now I do not know whether it is a good thing or a bad thing. No – I am not talking about Sachin becoming the coach. I am talking about the effort by CNN-IBN to appear cool. I would have preferred a more nuanced portrayal and something which is not blatantly obvious as a joke. The entire post about this is hardly 200-250 words. A little more effort would have been nice.

Use referral code HANDA to get 10% off.

PS: Special shout-out to friend Nishant Mungali who fortunately or unfortunately have their Birthday today. Go wish him and let him be surprised by random people wishing him Happy Birthday – let this be your second good deed of the day. The first one is sharing / tweeting this post. Hope you have done that already. :)

Got a discount code?